By Deirdre Gabbay As we move through liturgical time, we…

Comments Off on The Earth Belongs to Whom?
Uncategorized

This is one article in a seven-part series, recapping a shmita study group, sponsored by Hazon and Kevah. You can find other posts in the series on the shmita blog. 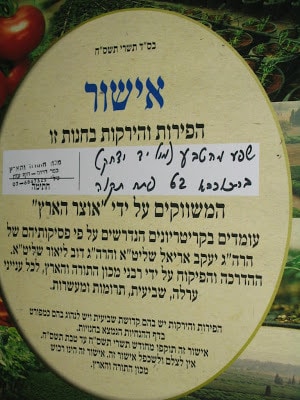 Shmita (the sabbatical year), on the theoretical level, is a radical movement towards social equality, awareness of land ownership, understanding of good agricultural practices, and a major reconsideration of a monetary system.
Sounds like an interesting thought-experiment, right?
Well, Shmita is also a real-life system that is currently implemented in Israel, the only place where following the laws of Shmita are traditionally required.  The various systems in place in Israel right now are quite complex.  There are essentially four options to choose from when a farmer is deciding in what capacity he will follow the laws of Shmita:

For someone just trying to buy food, this could get quite confusing.  Do I follow the laws of Shmita? Do I trust the Heter Mechira certification? Should I just be extremely safe and buy only imported food (despite the harm to the Israeli economy).  Why so many options? Why can’t we just follow Shmita the way the Torah explains it?
END_OF_DOCUMENT_TOKEN_TO_BE_REPLACED

Comments Off on Shmita in Action: Israel
Uncategorized

By Mirele Goldsmith
This is the third article in a seven-part series, recapping a shmita study group, sponsored by Hazon and Kevah. You can find other posts in the series on the shmita blog.
In this session we focused on how the rabbis translate the lofty ideas of Shmita into concrete practices. Ari compared what the rabbis do with Shmita to what they do with Shabbat. They take the general idea expressed in the Torah that we are to rest on Shabbat, and develop specific rules based on associations with similar concepts and textual references. He told us that in the Talmud the rabbis acknowledge that the laws of Shabbat are like a “mountain hanging by a hair.” Similarly, the rabbis take the very general admonition that the people are not to work the land, and that the land itself is to rest on Shmita, and develop it into a long list of halachot (laws).
Download the source sheet here
END_OF_DOCUMENT_TOKEN_TO_BE_REPLACED

Comments Off on Transforming Ancient Laws into Concrete Practices
Uncategorized


The next shmitta (sabbatical) year is two years away. At Hazon we’re gearing up for it already by doing some weekly learning on the topic with Rabbi Ari Hart, and recently, a look at some of our foundation stories in the Torah – Adam and Eve, Cain and Abel in particular – led us to unexpected realizations. Download the source sheet from shmita session two.
Such as: What if Jewish tradition sees farming as a lower, compromised, even “exiled” state? And what is the point of a cycle – whether it is seven days of Shabbat and the week, or seven years of a Sabbatical year cycle – if they keep simply repeating themselves?
For a roomful of Jewish foodies who have in some way embraced the Jewish farmer fetishes that farming and growing food is a way to truly connect to the land, the seasons, to God, and gratitude, etc., these Bible stories were a little disconcerting. Farming = exile? How so? Where does that leave our vision of an ideal relationship between people, land, and God?
END_OF_DOCUMENT_TOKEN_TO_BE_REPLACED
Comments Off on What If Farming Is Actually A Curse?
Uncategorized

On September 20, 2012, twelve people gathered at Makom Hadash for the first of a seven-part shmita study group, which was coordinated by Kevah with Rabbi Ari Hart as our educator. The first session focused on understanding biblical texts with a focus on how shmita has evolved over time and what we can learn from comparing and contrasting analysis of different Biblical references. Download the study sheet.
With the next shmita year starting Rosh Hashanah 2014, some might ask, why run a shmita study session now? But with less than two years until the next shmita year begins, now is the exact right time to think and plan for that year. As we can’t properly prepare for Shabbat 5 minutes before it begins, we cannot properly plan for the shmita year just as it arrives.
So, what is shmita all about?
END_OF_DOCUMENT_TOKEN_TO_BE_REPLACED

Comments Off on Shmita Study Group Convenes in New York