“When you finally slow down for the shmita year, don’t be surprised if there is confrontation waiting for you to wrestle with. If you see it through, you might find new blessings in your life.”

In Parashat Vayishlach, Jacob returns to his homeland of Canaan after living with his uncle for fourteen years. He now has a large family, two wives and eleven children, and amassed some wealth. After reconciling with his brother Esau, from whom he initially fled, his family arrived at Shechem. There Jacob’s daughter, Dinah, is raped and taken by Shechem (the local chieftain’s son). Her brothers Simeon and Levi slaughter Shechem and his house to retrieve Dinah. (I encourage you to learn more about this difficult passage – commentaries on My Jewish Learning and source on Sefaria are good starting points.) The parashah concludes with G!d renewing the covenant with Jacob, the death of Rachel in childbirth, and a record Esau descendants.
When he first arrives in Canaan, Jacob sends word of his arrival to Esau. Esau replies that he will meet Jacob with 400 men.
400 men? 400 men! Does he mean to honor Jacob or kill him and his family?
Uncertain about Esau’s response, Jacob anxiously prepares to both appease his estranged brother and protect his family. During the day, he sends servants ahead to present Esau with gifts. At night, he sends his family and possessions away to safety, across the Jabbok stream, in case Esau attacks. After all this work is done, the text tells us, “Jacob was left alone…” (Gen 32:25)
The extent and intensity of his preparations are punctuated by his sudden aloneness. This change in energy is further highlighted by the following scene.  The narrative continues, “Jacob was left alone. And a man wrestled with him until the break of dawn.” (Gen 32:25) Neither person wins the match, though Jacob is injured. Jacob believes this man is a divine being and demands to receive a blessing. So the man renames Jacob to “Israel”, which later becomes the namesake of the Jewish nation.
Shmita and the weekly Shabbat, both asked us to consider, what happens when we cease worrying and working, and surrender to rest and solitude?
The parashah responds that we may find someone (or something) waiting to confront us, to wrestle with us.
Just like the parashah, who we will wrestle with is unclear. Was the man an angel? A soldier of Esau? A manifestation of Jacob’s unconscious? We too don’t know what confrontation awaits us when we stop our laboring and doing to take time alone.
This confrontation was consequential for Jacob – he left both physically and psychologically altered. But, what if he never stopped and avoided this painful confrontation all his life? What blessings would he have missed out on? Would he have fulfilled the purpose G!d laid out for him?
When you finally slow down for the shmita year, don’t be surprised if there is confrontation waiting for you to wrestle with. If you see it through, you might find new blessings in your life. 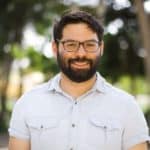 Bruce Spierer is the Public Education Manager at Hazon, overseeing and directing the development of public education programs that challenge and support Jewish institutions to develop and integrate commitments to addressing the climate crisis. Bruce brings ten years of experience working in urban agriculture, community composting, and public horticulture. Additionally, Bruce has worked in nonprofit strategic planning and leadership development. He holds a Masters degree from New York University in Environmental Conservation Education focusing on Nonprofit Management. Bruce is an amateur naturalist, lover of composting, and an avid fermenter of food and drink.