The shmita year asks us to release our attachment to the dominance of land, to live in the utter immediacy of the season, to sustain ourselves with whatever the earth provides when we step away for a moment. In short, shmita is asking us to be a little more like Esau.

Parashat Toldot tells a story of twins born fighting for status, and continuing to struggle throughout their lives. These twins, Jacob and Esau, are the children of Rebekah and Isaac, and their family’s story is one of deep love with an undercurrent of deceit. Isaac and Rebekah love each other, Isaac loves Esau, and Rebekah loves Jacob. Jacob, the younger of the two, buys Esau’s birthright and receives his blessing, effectively supplanting Esau as the older, more powerful sibling.
In the middle of the parashah, we have the only narrative that focuses solely on Isaac, the father of Jacob and Esau. There is a famine in the land and Isaac travels to Gerar to seek relief as his father Abraham had done under similar circumstances. While there, Isaac farms the land and becomes impressively wealthy, but he finds himself in the midst of disputes over water with the locals. The wells that his father had dug are compromised, so Isaac re-digs those, and adds more wells.
These new wells lead to more disputes as Isaac and his neighbors fight for ownership over the water. At last, Isaac digs a well that is not disputed leading to peace with the inhabitants of Gerar. We don’t get much information about Isaac’s character other than this: Isaac, digger of wells.
While this story reads like an intimate portrait of a family at odds, it is also one of relationship to land. Esau is a hunter. Jacob stays home and cooks, and Isaac is a farmer. And yet, Isaac favors Esau. He prefers the taste of game and he is comforted by the rugged outdoorsiness of his older child. In many ways, Esau and Isaac temper each other in the way that shmita is meant to temper our own relationship with the land.
Isaac the farmer is a symbol of attachment to land. He puts down literal roots, and that leads to disputes over water rights and ownership. Esau is at the mercy of the land, living every moment with the uncertainty of the future.
The shmita year asks us to release our attachment to the dominance of land, to live in the utter immediacy of the season, to sustain ourselves with whatever the earth provides when we step away for a moment. In short, shmita is asking us to be a little more like Esau. 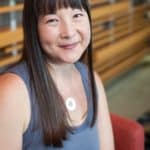 Akiko Yonekawa is the Associate Dean of Jewish Education at Gann Academy in Waltham, MA. She spends much of her time looking for adventures big and small in New England and Los Angeles, her hometown. She spent many years working and living at Brandeis-Bardin on Chumash land where she became a learner, teacher, and practitioner of land-based Jewish living. Now living in Cambridge, MA, she loves the flowers of spring and leaves of fall, but misses the sunshine and strawberries of the California coast.