Sometimes we have to tread lightly, even on holy land, so that we can recall the ultimate Source of food, wealth, and our own lives.

The entanglement of humanity and nature threads throughout the Torah, especially in Parshat Ekev. Sometimes it thunders through the world like the flood and revelation, and sometimes it whispers its way into the universe, like the ten statements of creation. Sometimes, as in this parsha, the connections are obvious, and often they are more subtle.
This set of actions and results, is hinted in the very name of the parsha.  Ekev has multiple meanings, the most relevant here is ‘as a consequence.’ However, the literal meaning of Ekev, heel, is also significant. Our heels walk upon this earth, with footprints of either destruction or growth, depending on our deeds, words, or even feelings and thoughts.
The Maor Eynayim elaborates on this point at length. He speaks about the distinction between water in Egypt and rainfall in Israel, the former being readily available, and the latter being dependent on prayer and good behavior.
Actually, this was the complaint here about the Manna: ‘Our souls are disgusted with this light or rotten bread’. One reason for their distress was that when they went to sleep, as the saying goes, ‘the cupboard was bare,’ In other words, they had to turn to G-d every day for their food. Moreover, the way they obtained the Manna reflected their personal behavior. If they were not so righteous, they would have to go a longer distance and spend more time preparing the Manna. The heavier the human hand, the more hidden the divine.
Another example- the Kedushat Levi explains Moshe hitting the rock instead of speaking to it, by contrasting these two modalities of operating through power versus operating through persuasion. Moshe’s MO had been to reveal the overpowering hand of G-d. So as Rabbi Sacks pointed out, it was difficult, after the soft voice of Miriam was no longer present, to tone down his influence. However, he was now out of sync with the promise of: ‘the rain will come in its time and the land will (softly and willingly) yield its fruit,’ and as continued in Ekev, in the second paragraph of Shema, ‘you will lose your impatience from on the good land.’
So in brief, the negative traits expressed in this parsha are mistrust, arrogance and ingratitude. And guess what national mitzvah is able to correct these traits? The mitzvah of shmita! Sometimes we have to tread lightly, even on holy land, so that we can recall the ultimate Source of food, wealth, and our own lives. 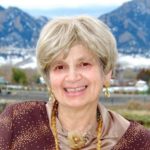 Yehudis Fishman has been teaching Torah and Chassidic philosophy to people of all ages and backgrounds for over fifty years both on the east coast and out west. For six years, she had been the spiritual director of Congregation Aish Kodesh in Boulder, Colorado and continues to teach and counsel both children and adults in Boulder and Denver. Her qualities of erudition, relevance, sensitivity, and humor endear her to a broad spectrum of multigenerational students. She is also the 2012 Boulder recipient of the Grinspoon-Steinhardt Award of Jewish Educator of the Year.  In 2014 she became a Maggid as well, so now she is known as ‘M&M’= Morah Maggidah.