We named our daughter Hadar.  She was born on Shabbat of parashat Tzav which contains a small and precious passage detailing the garments with which Moshe adorns Aharon for his service at the Temple.  The name Hadar shares a root with the word hiddur – beautification. In naming her Hadar we were invoking a blessing that she, like the women who spun, dyed and wove those sacred vestments, be forever engaged in the work of bringing beauty into the world. Furthermore, we were invoking the sensibility within Hadar, and within our family, of hiddur mitzvah – the beautification of a mitzvah (commandment).
This concept of beautifying a mitzvah traditionally refers to the objects of ritual practice, to the sacred objects through which we choreograph our Judaism—a sukkah, a lulav, a tallit, parchment, ink, quill, a mezzuzah, a chuppah etc. In my practice as both a studio and socially engaged conceptual artist, I am consistently examining and redefining the meaning of hiddur mitzvah. Over 25 years ago when my return to an engaged Jewish life was taking shape through artmaking and my studies at the intersection of Judaism and ecology, I was introduced to the song, Are My Hands Clean? by Sweet Honey and the Rock. The lyrics bring into focus the ethical and ecological dilemmas of the modern day production of a cotton shirt.  The wisdom teachings of shmita can be found in this song’s narrative which asks —what are the ethical obligations of land and labor as we conduct business, both sacred and mundane?
Today in my artwork, Or Hadash | עור חדש, an art intervention into the contemporary practice of parchment making, I revisit these ethics, these shmita values, by asking: How does the Jewish community reconcile the par between the inhumane treatment of the animals upon whose backs we are literally writing, and the sacred Hebrew texts inscribed on these very skins? It is a question—and a contemporary art response—informed by the same problematic narrative touched upon all those years ago by Sweet Honey and the Rock.
The practice of hiddur mitzvah in today’s world must concern itself with questions around land and labor such as: From where is this material sourced? Who produced it?  How was it produced? How was the person, land, or animal treated in production?  What we know of the Biblical practices surrounding hiddur mitzvah, like the preparation of the clothing for the high priests, is that for the most part, the systems at large treated land, animal, and humans with honor. Beautifying through craft was practiced across communities of women, men, and children, and everyone understood and respected materials, participating in their sourcing and in their destiny. While we cannot return fully to such collective practices, we can work towards the full meaning and embrace an ethical manifestation of hiddur mitzvah in our contemporary times.
Everytime I say Hadar’s name, in a way I am invoking that notion of hiddur mitzvah, reminding myself that we are always only a pause away from shaping and reshaping the way we move toward beauty, toward elevating the mundane, in our Jewish lives. 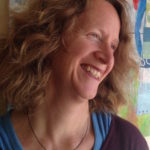 Shoshana Gugenheim Kedem is the Project Director of the Shmita Prizes.  She is recognized as an interdisciplinary artist, Torah scribe, curator and chutzpanit.  Her scribal work inspired her international collaboration, Women of the Book. Today Shoshana’s work as a scribe manifests through her project, Or Hadash |חדש  עור.   Shoshana is the founding Artistic Director and Chief Curator of the Greensboro Contemporary Jewish Museum  in Greensboro, NC and of The Gugenheim Portland situated in her family residence in the NE Portland, Oregon neighborhood where she lives with her human and animal tribe.
Shmita Friday is just one piece of a large conversation that has been ongoing for a long time! We’d love to hear what you think – post a comment below, join our facebook group, and start talking about shmita with your friends and family.