Shmita is the seventh year, following six regular years — and numbers in the Torah are not incidental, but rather a channel for meaningful ideas. The first, and most renowned, appearance of the number seven is obviously the seven days of creation. Later, Noah invites seven couples of the pure animals to come to the ark, exactly seven days before the flood (Genesis 7:2-4); the ark rests on the seventeenth day of the seventh month (Genesis 8:4); Avraham forges an alliance with Avimelech by giving him seven female lambs and calling his well “Be’er Sheva” (literally: “well of seven”, Genesis 21:28-32); his son Yitzhak reaffirms the alliance in Be’er Sheva as well.
“I will work for you seven years for Rachel” says Ya’akov to Lavan, his uncle, in our parsha (Genesis 29:18). He is then deceived into marrying Leah, Rachel’s sister, and only gets to marry Rachel in exchange for an additional seven years of labor. Later, Rachel appears to be infertile, while her sister Leah gives birth to no less than six sons in a row, followed by a seventh — and final — daughter (Genesis 30:21). Only then does her younger sister become fertile.
In both cases — the seventh year and the seventh child — marks the end of a cycle. It is the climax of a long and exhausting, yet fruit bearing, process, and is followed by a new cycle of production. Following the same line of thought, the Torah presents the Shmita year as the year which closes a cycle of six productive years by leaving the land fallow in the seventh. The same idea is reiterated in Kabbalistic thought, which divides the seven lower sefirot (basically, a sefira is a channel of divine consciousness through which the creator expresses itself), into two groups: the first six, which are considered masculine, and the seventh one — Malchut — which is considered feminine (paralleling Leah’s children). But more importantly, the seventh sefira resembles the world of Asiyah, of doing, the final purpose which all other sefirot are working towards. Shmita, then, is the purpose of the six years that precede it, and it gives them their meaning, like Shabbat gives meaning to the six days of doing. 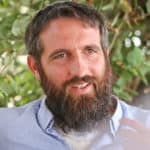 Aharon Ariel Lavi is the founder and director of Hakhel: The Jewish Intentional Communities Incubator in the Diaspora. Lavi is a professional community organizer and serial social entrepreneur who believes that networks are key to shaping our reality. Lavi is co-founder of Garin Shuva on the Gaza border; the Nettiot Intentional Communities Network, reengaging Haredi Ba’aley Teshuva into society; And MAKOM: the national umbrella organization of intentional communities in Israel. Lavi lives with is wife Liat, their four children, and a dog in the Negev and when he doesn’t work or study Torah he likes riding his bikes in the open fields of the Negev, and desperately trying to learn to play the flute, a guitar or anything that makes music.
Shmita Friday is just one piece of a large conversation that has been ongoing for a long time! We’d love to hear what you think – post a comment below, join our facebook group, and start talking about shmita with your friends and family.