While the language may be a product of recent decades, the dichotomy between an “abundance mentality” and a “lack mentality” is a core human experience. The basic principles of these two concepts reflect a question of perspective; one who embodies an “abundance mentality” sees opportunities even in life’s challenges, whereas one who embodies a “lack mentality” concentrates on the fear of not having. Even as these ideas have gained traction in recent years, we see this tension reflected in the Torah.
The Torah preempts the human fear of a lack of food – “What will we eat in the seventh year?” (Lev. 25:20) and the Torah sets out a reassurance that God will provide a three-fold crop in the sixth year. Is this a miracle, or something more nuanced?
In Parashat Toldot, near the conclusion of the well-known vignette wherein Isaac, in his blindness, gives a blessing intended for his eldest son, Esau, to Jacob, his younger son in disguise. Isaac blesses his son (Gen. 27:28): “May God give you from the dew of the heavens and from the fats of the earth; and an abundance of grain and fresh wine.” In his commentary on this verse, Ramban (Rabbi Moshe ben Nachman, 1194-1270 Spain and Israel), writes:

“…the blessing is not that God should give him ‘from the dew of the heavens,’ because dew falls in every place, and were he to have said that God should give an abundance of dew, or that it should fall in its due time, as is related in “I will give your rains in their due time,” (Lev. 26:4) that would be a blessing.…”

Following the laws of Shmita and Yovel, the Torah states (Lev. 26:3-4): “If by my statutes you walk and my commandments you observe and do them. I will give your rains in their due time; and the earth will give of her produce, and the tree of the field will give of its fruit.” The Torah here is not speaking of the observance of Torah law generally, but is specifically referring to the laws which precede this statement – Shmita and Yovel. Why does Ramban reference Shmita in his comment on Isaac’s blessing? In my opinion, when the Torah refers to the tension of tov v’ra – good and bad, or brakhah u’klalah – blessing and curse, that it is an expression of the tension between stability and instability. Ramban concludes by explaining that Isaac’s intention is that God should bless his son in hunting without danger and that the produce of the earth should not be “bad,” using the word ra. In other words, that the produce should be stable.
Shmita is scary because it raises deep fears of instability. Perhaps, instead of understanding God’s promise of a three-fold crop as a miraculous happening, the Torah is urging us that if we enact the principles and systems necessary to make Shmita possible – i.e., utilizing resources to support vulnerable community members – then we create an environment of stability and ensure “blessing.” Shmita, then, becomes a lesson in tempering our fear of lack by establishing systems of abundance. 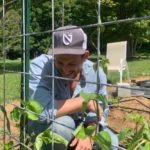 Justin Goldstein farms and serves as the Scholar-in-Residence at Yesod Farm+Kitchen in Fairview, NC, a new regenerative farm on ancestral Cherokee and Catawba land stewarding Jewish ancestral agricultural wisdom.  Ordained as a rabbi in 2011, Justin previously served congregations in Bangor, ME and Asheville, NC. For over 20 years, Justin has been investigating the relationship between environmental sustainability, environmental justice, food security, and the Jewish tradition.
Shmita Friday is just one piece of a large conversation that has been ongoing for a long time! We’d love to hear what you think – post a comment below, join our facebook group, and start talking about shmita with your friends and family.