The story of Noah is a tale that shows up in many ancient forms. But the lessons we learn from the various deluge narratives are more applicable today than perhaps ever before.
As the story opens, we are told that Noah remains singularly righteous as the rest of humanity falters. How is this possible? Just a short while ago we were being given the Garden “to tend and guard.” We were just beginning to explore the ways that humanity could spread across the land with divine blessing. So what should be done when human corruption rears its destructive head again?
In this case, God provides clear instructions: Build an ark and take in the animals. This is similar to the instructions we are provided for Shmita: Prepare and gather extra produce ahead of time.
As the Earth is subject to the largest reset ever imagined, Noah, his family, and God’s creation will be protected with the promise of a new world; a more righteous humanity. And yet, once they finally step out of the ark and make their new life we are immediately presented with more human failure – the Tower of Babel, an attempt by humans to build a structure to match the might of God’s power and glory. But why? Less than one generation ago all creatures on Earth were destroyed, and here they are behaving as if nothing had happened.
Noah is a cautionary tale. The accumulation of power and the belief in the infallibility of humanity leads us to destruction and imbalance. Without preparation, humans fall into the cycle of power, corruption, and destruction repeatedly. But the story of Noah also offers us the first glimpse of balance between divinity and humanity. While the flood was a particularly excessive attempt to balance the scales, we are given a promise that God will never again bring this type of destruction – alternatives will be given. A new, sustainable model for human existence.
One of the most powerful commandments is the year of complete rest, the Shmita. Every seventh year we are commanded to step back from human nature and reconnect to the divinity that surrounds us. This year offers an opportunity for loans to be forgiven, the land to lie fallow, for families and neighbors to reconcile their differences, and for those who suffer in poverty to eat as if they have nothing to fear (Deuteronomy 15:1-11; Leviticus 25:1-7). In effect, Shmita counters the forces that march us towards selfishness and imbalance.
We are not required to behave this way every year. There is recognition by God that we may not be capable of this behavior always and a compromise is given. A reminder that true balance is possible with a little preparation, determination, and awareness. 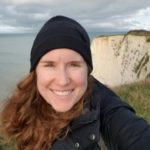 Hannah Henza is the Hazon’s Director of National Programs, managing programmatic content and outreach across the organization including a variety of field building and climate-related initiatives including JOFEE gatherings, the Hazon Seal of Sustainability, and ongoing efforts to catalyze our community-centered response to a global climate crisis. Hannah has more than 10 years of experience in the non-profit sector and has previously held positions in fundraising, event management, and community organizing. Additionally, Hannah has worked as an outdoor educator, wilderness guide, and experiential youth educator across the United States. She earned her Master’s in Nonprofit Management and Jewish Studies at Gratz College as a Legacy Heritage Fellow and holds a Bachelors’s degree in Cultural Anthropology and Religious Studies from North Carolina State University. Hannah is a certified yoga teacher, avid outdoors-woman and proudly shares her home – a self-built tiny house on wheels – with her husband, dog, and cat.
Shmita Friday is just one piece of a large conversation that has been ongoing for a long time! We’d love to hear what you think – post a comment below, join our facebook group, and start talking about shmita with your friends and family.