Editor’s Note: Welcome to D’varim HaMakom: The JOFEE Fellows Blog! Most weeks throughout the year, you’ll be hearing from the JOFEE Fellows: reflections on their experiences, successful programs they’ve planned and implemented, gleanings from the field, and connections to the weekly Torah portion and what they’ve learned from their experiences with place in their host communities for the year. Views expressed are the author’s and do not necessarily represent Hazon. Be sure to check back weekly!
P.S. Interested in being or hosting a JOFEE Fellow? Applications for prospective fellows will continue to be reviewed as positions are available.

The Torah portion for this week, Chayyei Sarah, begins with the death of our matriarch Sarah. We see Abraham mourn the loss of his beloved, and then immediately take action by purchasing her burial grounds—the cave of Machpela—and then sending his servant to go find a wife for their son, Isaac. Abraham says goodbye to her in an honorable way, and then makes moves to follow through on the covenant that God has made with him and Sarah—the promise of land and descendants. God makes this promise on several occasions, but only now, once Sarah has passed, does this promise shift from passive to active through Abraham’s first action steps in this week’s parsha. It is clear that it is up to Abraham to bring this covenant to life, this vision into reality.
God promises, but we have to act.
In reflecting on this story, I am thinking about what is happening in our country right now, and what I’ve personally been experiencing as we undergo such change. In the wake of the election, in anticipation of the impact of this government turnover, it feels as though a death has occurred.
Within the earth-based, spiritual Jewish community in the East Bay that I am part of, I first felt the collective need to let it all sink in, and to really grieve. And then, in allowing that to move through, I’ve been experiencing a powerful sense of activation, urgency and mobilization like I’ve never felt before, both within myself and amongst the people. People are taking action.
Amongst many individuals in this community, myself included, people are primarily taking action around Standing Rock. For anyone who may not know, right now there are hundreds of indigenous tribes, as well as many allies and supporters, gathered in North Dakota at the base of the Missouri River, to stop the construction of the Dakota Axis Oil Pipeline (DAPL), which will contaminate the major source of drinking water for the Standing Rock Sioux and many other beings. This movement takes a stand for the rights and respect of native peoples, for renewable energy and the fight against fossil fuels, and for the healing and protection of the waters.

This makes me wonder, in light of this week’s Torah Portion—as modern Jews who are passionate about the environment, building community, and reclaiming our own ancient wisdom and earth-based traditions—What is our covenant with God? What actions do we need to take in order to fulfill this covenant?
Of course the answer is different for everyone. But for me, as the JOFEE Fellow with Wilderness Torah, I believe that my covenant is three fold: to be in connection with and in service to the earth, to mentor youth to be upright, conscious, and empowered yet humble human beings, and to cultivate resilient, inclusive and genuinely supportive community. I hold these core values as as a prayer, and a promise for a more just, connected and sustainable world.
Moreover, with this understanding that God promises and we have to act, I am left thinking: what does it look like for my prayers to be put into action, and for me to take responsibility in bringing this vision– this covenant– to life? What actions do we all need to take in order to manifest our visions, and to uphold our promises with God, with each other, with ourselves?

Gratefully, a few days after the election occurred, I had the blessing of working as a mentor at B’hootz, Wilderness Torah’s Sunday School in the Woods program. I had the pleasure of being with children ages 5-10 in the redwood forest, and facilitating experiences that allowed them be in their natural state of wonder, curiosity and play. At B’hootz we play a lot of nature connection games like fox walking, camouflage, and treasure hunts. We teach kids primitive skills and crafts such as cortege and carving. We learn Jewish blessings, traditions and stories. We remember the simple joy of being outside with friends.
On this particular day at B’hootz, one key thing we learned about was Honorable Harvest– what it means to be in sacred reciprocity with the earth, and to gently take only what we we need and remember to give back. We collected herbs that grow locally to make a wild tea potion. The kids were engaged in their magic-making powers, they were able to literally taste the forest, and I loved every moment of it.
It reminded me that nature-connection mentorship and being in joy with these magical B’hootz children in the Oakland Redwoods is my prayers in action. I am truly so grateful to be participating in this world in this way. 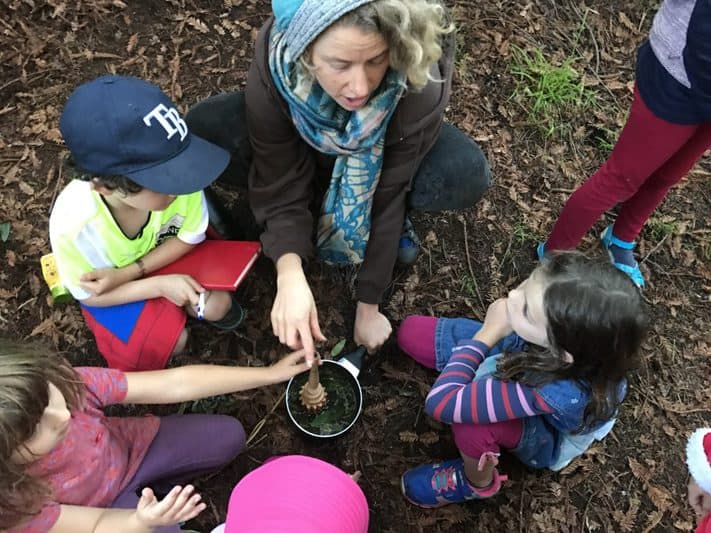 Even amidst all the many challenges that we are collectively facing right now– with the state of our government, and the violence against the earth, the waters and indigenous folks– we must not lose sight of our visions of a brighter future. Just as Abraham mourned the loss of his wife Sarah, and then took the first steps toward manifesting his covenant, we too must honor our pain, and then take action for what we stand for. May we all uncover what it is that we stand for and believe in, and may we all take action towards creating the world we envision for ourselves, for our children, and for the earth.
Daniella Aboody is the JOFEE Fellow at Wilderness Torah. Previously, she has worked with Amigos de las Americas in rural Nicaragua, where she mentored youth volunteers, and coordinated community development projects centered on health & nutrition, education, girls’ rights, the environment, and economic development. She can be frequently found dancing, playing in the kitchen, or making art in her garden in Berkeley, CA. Read her full bio here.