On a weekly basis, I make hummus – very much at the mercy of area farmers, as I use fresh produce in each batch – and I donate all of the profits to Philadelphia urban farms. Admittedly, I do not think I ever had learned of the concept of Shmita before this year’s Hazon Philadelphia Jewish Food Festival – and I wasn’t initially sure how, in any capacity, I could apply the tradition of the Shmita to my 21st Century-paced life in a very large city. I think I’ve made some sense of it since November’s festival, though, and I offer my thoughts below.
Though Shmita, a biblical mandate instructing farmers to let land lay fallow every seventh year, is a seemingly straightforward commandment, its implications are several. For instance, it isn’t Shmita that is the reason I’ve been preserving local produce in hummus, but thoughts and discussions regarding Shmita have helped me affirm what I am doing (and, if nothing else, the notion of Shmita has seemed a valid excuse to calm down my everyday life and to pay particularly close attention to my relationships with family, neighbors, and with nature).
Regarding my hummus practices and the Shmita, perhaps the 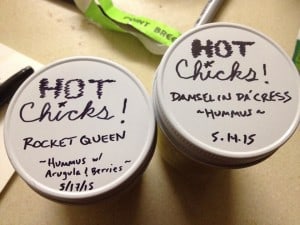 most obvious relationship is how each batch serves as a method through which I am able to preserve the harvest, if only for a few weeks (most veggies from these here parts are free of pesticides and wilt within only a few days of harvest; turning them into hummus extends their shelf life by a couple of weeks, as they become naturally preserved in the lemon and sea salt). Further, making stock from scraps and roots, and using the stock to add flavor, creaminess, and nutrition to each batch, adds an element of resourcefulness to the hummus-making process, also which could be argued to be consistent with the general concept of Shmita.
Next, as Shmita itself is part of a greater agricultural cycle, so is my entire venture. What I take for hummus making from the land via local farmers and my own foraging, I give back to the very same farmers or to the land itself, by way of my profits from hummus sales (over $1,000 last year), spending some free time to volunteer on their farms, and by composting spent scraps. This endless give – take -make – give formula is a sinusoid at once both simple and elegant; I only wish I had more time (and hands), to greatly expand this system into something large enough to not only help sustain urban farming in Philadelphia but also to help it grow.
On a more personal level, upon initially learning about this being the Shmita year, I told myself to use Shmita as an excuse to take back my personal Shabbos. So I did just that- what used to be a once- or twice-a-month occurrence, now, I attend family Shabbos practically each week. This usually entails a relaxed dinner at my parents’ house, followed by a movie, followed by my crashing in my uncle’s old room, waking early, and feeling wholly refreshed to take on the Clark Park Farmers’ Market or to take my kayak out for a spin on the Schuylkill on Saturday morning. Thus, I’ve been able to use  Shabbos to focus on my relationships with family, friends, and nature, without the workweek sense of immediacy. I think an underlying but extremely important component to Shmita is just that – with rest and reflection, we are able to build and strengthen bonds with one another, and in our community.
Through hummus sales and other ventures in and around Philly, I’ve developed or strengthened relationships with many individuals and organizations in our region, several of whose work with sustainability, food justice, and the like I greatly appreciate and admire. With support and inspiration from activists like Judy Wicks (Fair Food Philly), non-profit organizations like the Agatson Urban Nutrition Initiative and Repair the World, and product donations or price cuts from for-profit organizations like Whole Foods Callowhill, Soom Foods, Philly Style Bagels, and Greensgrow Farms – not to mention the outpouring of support by colleagues, friends, and total strangers alike – I’ve been given the psychological drive to power ahead with this endeavor; to make as much hummus as I can without driving myself mad. And, as someone whose greatest pleasures in life are centered upon interactions with people, it has been the individual relationships I’ve built or sustained through this venture that have been most meaningful to me.
Thus, by “letting land lay fallow”, at least here in Philly in the 21st Century, we are not expected to sit on our haunches; no, we ought to celebrate each other, our land, our lives – and to collaborate and innovate in order to make the next seven years even better, for all of us! 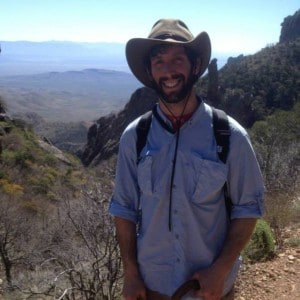 is a public school math teacher, living in the East Fairmount neighborhood of Philadelphia. His hummus is named Hot Chicks! and is available in eight-ounce, refillable mason jars (AKA “hummus growlers”), attainable by contacting him directly at bomzemh@gmail.com, or by visiting the non-profit café Monkey & Elephant at 2831 W. Girard Ave., Phila., PA. Every jar is sold on a pay-what-you-wish basis (anywhere from $5-10). He will be selling hummus in Philadelphia at the next Punk Rock Flea Market (Ninth and Spring Garden Streets) on Sunday, June 7th. His second cycle of donations will give all profits to Mill Creek Farm in West Philly.
With flavor names like The Lady is a Ramp and Damsel in Da Cress, using a base of peeled organic scratch chickpeas,  Soom Foods’ tahini, local produce naturally preserved with sea salt and organic lemon juice – some even with locally grown Thai chilies or with spices he’s accumulated abroad – you’ve gotta try some of these hotties.

Roseanne Barr and What Can Happen When We Teach about Shmita