“May the Merciful One turn our hearts toward the land, so that we may dwell together with her in her Sabbath-resting, the whole year of the Shmita!” Harachaman hu yashiv libeinu el ha’aretz l’ma’an neishev yachad imah b’shovtah kol sh’nat hash’mitah!
It was erev Rosh Hashanah – just before the Shmita year began – when I wrote this prayer to add to Birkat Hamazon (the blessing after meals) during the Shmita or Sabbatical year. I was trying for months to come up with a blessing for the Shmita, but it just wouldn’t come. It works that way for me: I can only feel the quality of a particular holy time or season when that time is upon me. It is a kind of living in the present that can be wonderful, and it can make ritual enormously fun and truly profound, even if it makes meeting deadlines harder.
When I wrote this blessing, I also prayed in my heart that these words would not just be beautiful, but that they would actually be something I could experience, this year, in Israel. So when the opportunity came to join a delegation to a Palestinian farm to replant fruit trees that had been removed by the IDF last spring (in the middle of a dispute with Israel’s government), my heart jumped at the chance to become involved.
Now, I should tell you a few things about this farm, and a few things about the Shmita year. About the farm: The first thing is that the Nassar family has owned and lived on this farm since long before the establishment of the state of Israel – I saw the caves that had been carved out of the land as dwellings long ago, as was once the custom, which are now used as classrooms and a chapel. The second is that when you enter the farm, the first thing you see is a sign painted on a stone that says, “We refuse to be enemies.” 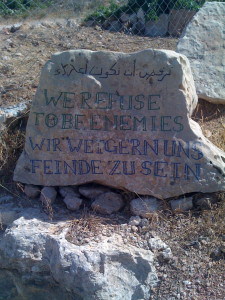 Rabbi David Seidenberg directs neohasid.org and is the 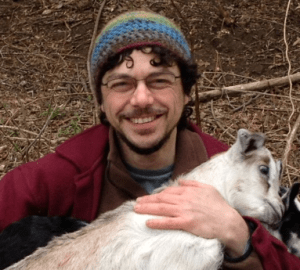 author of Kabbalah and Ecology: God’s Image in the More-Than-Human World, published by Cambridge University Press. (If you would like to order the book from Cambridge, use discount code KEDMS14.) The Shmita harachaman was put to music by Nili Simhai, director emeritus of the Teva Learning Center. The Center for Jewish Nonviolence works in partnership with T’ruah: The Rabbinic Call for Human Rights. The Center can be contacted through their Facebook page.

Shmita, like Shechina, Goes Global: Reflections from a Hammock on This Shmita Year

Emerging from an Organizational Shmita