On July 1, with Congress having failed to pass any legislation about student loans, the interest rate on them doubled.
As Senator Elizabeth Warren pointed out:
“Right now, the government lends money every day to big banks at less than 1% interest. [The interest rate it demands from students was 3.4% till June 30, and is now 6.8%.] Right now the federal government is making a profit from our students. Just last month, the Congressional Budget Office calculated that the government will make $51 billion this year off student loans.”
This in a society that has disemployed 14 million people who want and need to work full time. Many of these millions are college graduates who can no longer pay off these loans.
What is the solution? Let’s consult a sacred teaching of the Torah —
At the end of every seventh year, you shall cancel/ release/ forgive/ annul/ all debts. This is the procedure: Everyone who has lent money to a neighbor writes it off. You must not press your neighbor or your kinfolk for payment: This release comes from YyyyHhhhWwwwHhhh , the Interbreath of Life. (Deuteronomy 15 : 1-2)

This is the same Seventh Year that Leviticus 25 proclaims should be Shabbat Shabbaton, Restfulness to the exponential power of Restfulness, in which the land is liberated from being worked and those who live with and in the land are liberated from working it.
Adam [human earthlings] and adamah [earth], who always live as intertwined as the words that name them, spend a year in catching their breath from the work they have done together, before they begin to work together again.
And the human society encourages this Restfulness, by releasing everyone from debt.
Let us listen to another holy scripture, the Quran:
Those who devour usury will not stand except as stands one whom the devil by his touch has driven to madness. That is because they say: Trade is like usury: but Allah has permitted trade and forbidden usury…. Allah will deprive usury of all blessing, but will give increase for deeds of charity, for He loves not any ungrateful sinner…. O you who believe, fear Allah and give up what remains of your demand for usury, if you are indeed believers.
If you do it not, take notice of war from Allah and His messenger, but if you repent you shall have your capital sums; deal not unjustly, and you shall not be dealt with unjustly. And if the debtor is in difficulty, grant him time till it is easy for him to repay. But if you remit it by way of charity, that is best for you, if you only knew. (Qur’an 1:275-280)
“Usury” in the Quran is understood by Muslim tradition to mean charging any interest at all upon a loan.
What would it mean to approach — not imitate —these teachings? Let’s start with edgy possibilities and work back toward what is more “moderate.”
What if the American people proclaimed through action that in the seventh year after students take out a loan, all student debts are annulled, released?
What if the American people proclaimed through action that after seven years of payment, the first $180,000 owed on owner-occupied home mortgages are annulled, released? (Why $180,000? Because “18,” in Jewish lore, stands for “life.”)
What do I mean when I say, “Proclaim through action”?
Let’s start outside the legal system. That is how the sit-in and freedom-ride and voter-registration movements began. Only later, as those actions stimulated enormous energy, were the laws passed prohibiting segregation or denial of the right to vote.
What if these student debtors and mortgage debtors stopped paying? What if churches, synagogues, mosques, temples throughout the land said –-
“We stand with you! You are our neighbors, our kinfolk. We forgive/ annul/ cancel these debts.
“If the banks send police to repossess your houses, we will stand with you!
“If the colleges try to throw you out of classes where you are learning to be effective workers and wise citizens, or sue you when you are trying to turn your learning into a life well-lived, we will stand with you!”
Is this “unrealistic”? Why?
Is it less realistic than to let millions of our children, our neighbors, our future, buckle under the weight of unjust debt?
Is it less realistic than to throw millions of us out of our homes?
Maybe you think this vision is over the moon. OK. Then look for other steps that may seem to you more “realistic.”
The state legislature of Oregon just passed – unanimously – a law directing the Higher Education Coordinating Commission to create a Pay It Forward pilot program to put before the 2015 legislature. Pay It Forward would allow college students to attend college tuition-free and debt-free, and upon graduation begin paying a small, fixed percentage of their income into a public fund for education.
Notice – a percentage of their income, not a fixed amount. If they have been disemployed, no payment would be due. If they have founded a new company and are making millions, a large amount.
Or– some other creative approaches. Try clicking here to read The Debt Resistors’ Operations Manual:
http://strikedebt.org/The-Debt-Resistors-Operations-Manual.pdf
This manual, says its preface, was “written by an anonymous collective of resistors, defaulters, and allies from Strike Debt and Occupy Wall Street. It aims to provide specific tactics for understanding and fighting against the debt system.
“You’ll find detailed strategies and resources for dealing with credit card, medical, student, housing and municipal debt, tactics for navigating the pitfalls of personal bankruptcy, and information to help protect yourself from predatory lenders.
“Recognizing that individually we can only do so much to resist the system of debt, the manual also introduces ideas for those who have made the decision to take collective action.”
For widespread debt is caused not by individual laziness but by collective corporate greed.
The failure of Congress even to remedy debt and ease its burden, let alone release debtors from it altogether, is rooted in a structure of power that thwarts democracy, rather than strengthening it.
It is top-down global corporate banks that profit from debt that crushes the poor and the middle class — disemployed factory workers, drought-busted farmers, laid-off garbage collectors, hopeless college grads, cancer-struck housewives, and ruined home-owners alike.
Why did the Hebrew Bible, the Christian New Testament, the Rabbis’ Talmud, the Muslim Quran all command these limits on debt and prohibitions of usury? They remembered oppression by Pharaoh and by Israelite land-owners, they experienced economic oppression by the Roman Empire and its puppet local governors, they resisted oppressive power elites in Mecca.
All these approaches are rooted in a sense of the world that – whether it is consciously rooted in the Bible, the Quran, or simply an understanding of the Interbreathing Spirit that unites all life — refuses to allow human beings to be oppressed and entangled by debt. Oppressed and entangled by top-down, anti-democratic, unaccountable pyramids of power.
The decision to act rests upon us all. 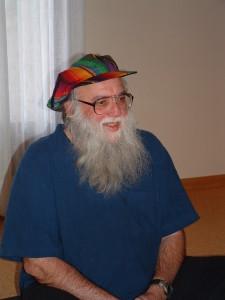 Rabbi Arthur Waskow, Ph.D., is the founder (1983) and director of The Shalom Center. His newest books are a revised edition of Seasons of Our Joy(Jewish Publ Soc, 2012) and Freedom Journeys: The Tale of Exodus & Wilderness Across Millennia, co-authored with Rabbi Phyllis Berman (Jewish Lights Publ., 2011). See also Waskow, “Jewish Environmental Ethics: Adam and Adamah,” in Oxford Handbook of Jewish Ethics and Morality(Elliot N. Dorff and  Jonathan K. Crane, eds.; Oxford University Press, 2013). Many creative applications of traditional Jewish and other spiritual and religious teachings to current political, economic, and ecological issues can be found on The Shalom Center’s website.