On September 20, 2012, twelve people gathered at Makom Hadash for the first of a seven-part shmita study group, which was coordinated by Kevah with Rabbi Ari Hart as our educator. The first session focused on understanding biblical texts with a focus on how shmita has evolved over time and what we can learn from comparing and contrasting analysis of different Biblical references. Download the study sheet.
With the next shmita year starting Rosh Hashanah 2014, some might ask, why run a shmita study session now? But with less than two years until the next shmita year begins, now is the exact right time to think and plan for that year. As we can’t properly prepare for Shabbat 5 minutes before it begins, we cannot properly plan for the shmita year just as it arrives.
So, what is shmita all about?
END_OF_DOCUMENT_TOKEN_TO_BE_REPLACED

The article below is reposted from Tikkun Daily, where it was originally published on September 16, 2012. 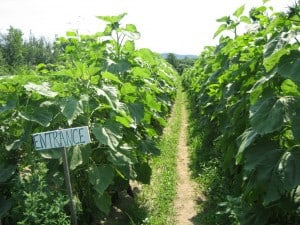 The fabric of the entire Jewish cosmology, culture, and story is interwoven with the patterns of cycles. This cycle begins with each of us, in our own bodies, with the rhythm of breath, the rhythm of inhale, exhale, and the moments of stillness and calmness in between each breath. It is this cycle which creates our collective, evolving body. Not just the human body, but the body of Earth, of life itself. We mark time with these movements of transformation, with this cyclical breath of the moon. We count our months and years as her body waxes and wanes, exhales and inhales. It is this cycle which is the same as our own rhythmic breath, our own beating heartbeat and flowing pulse.
On this particular Rosh Hashana, while invoking the year 5773, as you complete one yearly lunar cycle and begin a new one, you are invited to recall another cycle, mostly forgotten, but one as old as the Jewish story itself, still unfolding in the undercurrents of our collective subconscious. We are now welcoming in year 5 of a 7 year cycle known as the Shmita Cycle. If our weekly Shabbat is a 24 hour period of stillness, then Shmita, the Shabbat of the Land, is a year-long period of stillness.
Shmita, literally translated as the ‘year of release,’ and more widely known as the Sabbatical Year, is the focal point of Jewish earth-based traditions. Honoring the sacredness of land and her role in building community, this tradition resurfaces our collective ancient memories from a distant past, celebrating holistic relationships with earth and the village culture. Shmita is our mystery wisdom tradition; a celebration of cycles, community, faith and resiliency. In 2 years from now, on Rosh Hashana 5775 (which will be 2014), the cycle will once again enter into it’s 7th year, and the Shmita period will begin anew. And this is when things will get quite interesting.
The request is bold. Many may recall the year of Shmita simply as the Biblical time when we were guided to ‘leave all agricultural land fallow.’ It is easy to say, but can you take a moment to dwell on what it might mean to actually leave a society’s agricultural land fallow? And might we all realize just how radical and audacious, and perhaps alarming, that sounds? As an equivalent, since most of us are not farmers in this age, imagine saying, ‘a year when we close every single shopping mall and bank’ (which happens to not be that far off from what the Shmita period does in fact imply). How does that sound to you?
END_OF_DOCUMENT_TOKEN_TO_BE_REPLACED

Comments Off on Embracing the Shmita Cycle: A New Year Vision